I was sat at my desk having just recently returned to work after a wonderful six months of additional paternity leave.

My dad, who had been with my wife and daughter at the zoo on this particular Friday afternoon, rang me up.

“Don’t panic”, he said. Not a good start. My stomach is immediately in knots. What is it?

“We think Cordy has had a seizure but she’s OK. She’s in an ambulance on the way to hospital”.

My heart sank. How could this happen? My baby girl, just ten months old, has had a seizure?

The first person that enters my head is my older brother who has epilepsy. What if my girl has it too?

The hospital is only a mile or so away from where I worked but the drive felt like an eternity.

I arrive at A&E to find the girl cuddled up to mummy. Her usual beaming smile is absent and she’s very sleepy.

I pick her up and hold her tight to my chest – I feel better for having her in my arms, but that worried feeling is still rooted to the pit of my stomach. Little did I know then that this fear will be with me for the next 12 months, and still rears its ugly head to this day.
It’s decided that she should be kept in for tests and monitoring. Following a sleepless night on the children’s ward we finally get the judgement from the doctor.

Cordy, they suspect, had suffered a febrile convulsion.

My instant thought is: “What’s one of those”, closely followed by “will she have another one?”.

For those who, like me in early 2014, had never heard of such a thing, the NHS website states:

“Febrile seizures (febrile convulsions) are fits that can happen when a child has a fever. They most often happen between the ages of six months and three years.

“It can be frightening and distressing to see your child having a seizure, particularly if it’s their first one. However, the fits are usually harmless and almost all children make a complete recovery afterwards.”

We were told that one in 20 ﻿children have febrile convulsions at some point and it may be the case that she never has another one, so we headed home with our information pack hoping for the best.

During our girl’s seizure her temperature soared, her eyes rolled upwards and her lips were blue, signs my dad was familiar with because of my older brother.

It lasted 5-10 minutes but having not been there it was hard for me comprehend how harrowing it must have been for my wife. I couldn’t imagine it and quite simply didn’t want to.

But that was all about to change. If I thought the first time was bad nothing prepared me for the living nightmare that was about to follow.

A few months had passed since that first episode and I guess we’d began to let our guard down. Maybe it was just a one-off. Wrong.

It was a hot summer evening and my wife was on her way to a meal with work colleagues when Cordy became unresponsive in her high chair.

There’s no other way of dressing it up – I panicked. I panicked a lot. She was burning hot so I stripped her down to her nappy and stood in the garden frantically scrolling down to my wife’s number in the mobile phone contacts.

Her instant reaction was to tell me to ring an ambulance and that she would meet me at the hospital.

The paramedics arrived with my daughter still in my arms, motionless and staring straight through me.

Why wasn’t she coming back around? Am I going to lose her? I was terrified.

The next part was a blur. I vaguely remember being sat in the ambulance talking to one of the paramedics while her colleague cared for my daughter.

I was trying to remain calm on the outside but I was crying inside.

We arrived at A&E and she was raced through the doors straight past my shellshocked wife.

It turned out my daughter had a second seizure in the ambulance.

Although she was getting oxygen into her body she wasn’t getting carbon dioxide out so she was tubed up and her breathing aided by a machine.

It was all happening so fast and I couldn’t have felt more helpless.

Once she was stable she was taken to Alder Hey Children’s Hospital in Liverpool and placed in intensive care. How could this be happening?

Seeing her precious, delicate one year old body covered in wires and tubes was heartbreaking. It’s so hard to remain positive in that situation, your natural emotions are to fear the worst.

It was the early hours by now and the wonderful medical staff urged us to get some rest before setting up makeshift beds in a room just for me and my wife.

You might be thinking how could you possibly sleep in such circumstances but exhaustion had got the better of us by this point and we managed to get a few hours.

When we woke up we rushed back to see her and were informed she would be brought back around later that morning.

Yet more dark thoughts began to spring up in my head. What if there is lasting damage? What if the girl that wakes up isn’t the same happy, smiling one that I’d been feeding the evening before? I’m not ready to say goodbye to life with that girl I worship.

Those thoughts quickly vanished within a groggy few minutes of her waking up.

Much to our relief we were reunited with her beaming smile and she began moving around her bed as if it had all been a bad dream.

As a side note to this particular episode, me and my wife got our daughter’s name tattooed on our chests, just above our hearts. For many different reasons it felt hugely cathartic and in testing times reminds us of what our daughter has been through.

I wish I could say that was her last seizure but it wasn’t.

After another period of respite, a third struck in December 2014.

Again I was at work but this time it was the nursery calling, and as any parent will know as soon as you see them flashing up on your phone the colour in your face makes a very hasty exit.

They said she’d been sick and was very quiet. Worryingly they couldn’t confirm to me if she was having a convulsion.

I jumped in the car and arrived to find her fitting. I shouted for them to call an ambulance and held my daughter’s hand as she lay motionless on a big cushion.

Her eyes were vacant again but unlike last time her arm started to jerk and she was drooling at the mouth.

I can honestly say I’ve never been more frightened in my entire life. Is this one seizure too far? Is this the one that causes lasting damage?

Thankfully, Cordy came back around at hospital this time and as ever was soon back to her normal self.

However, this episode was not triggered by a fever so we were referred to Alder Hey for an epilepsy test.

This will sound strange after all we’d been through but seeing my daughter with wires attached to her head being recorded while she played so innocently filled me with the most sadness.

Why is my baby girl having to deal with all this?

In the end the test showed no signs of her having epilepsy.

The last seizure she suffered was in early 2015. I was working, again, but my wife was off and made the call I dreaded receiving on a daily basis.

With the ambulance on the way, Cordy suddenly vomited and it seemed to snap her out of the convulsion.

She was taken to hospital and although very tired we made it home later that night.

Touch wood there hasn’t been an episode since.

I have no medical evidence to back up what I’m about to say but with Cordy being born nearly five weeks premature she was always a very small baby and toddler.

Perhaps she wasn’t strong enough to fight back and deal with a convulsion when it took hold?

When she turned two she seemed to grow much quicker and is now a really tall, strong girl, both physically and mentally. 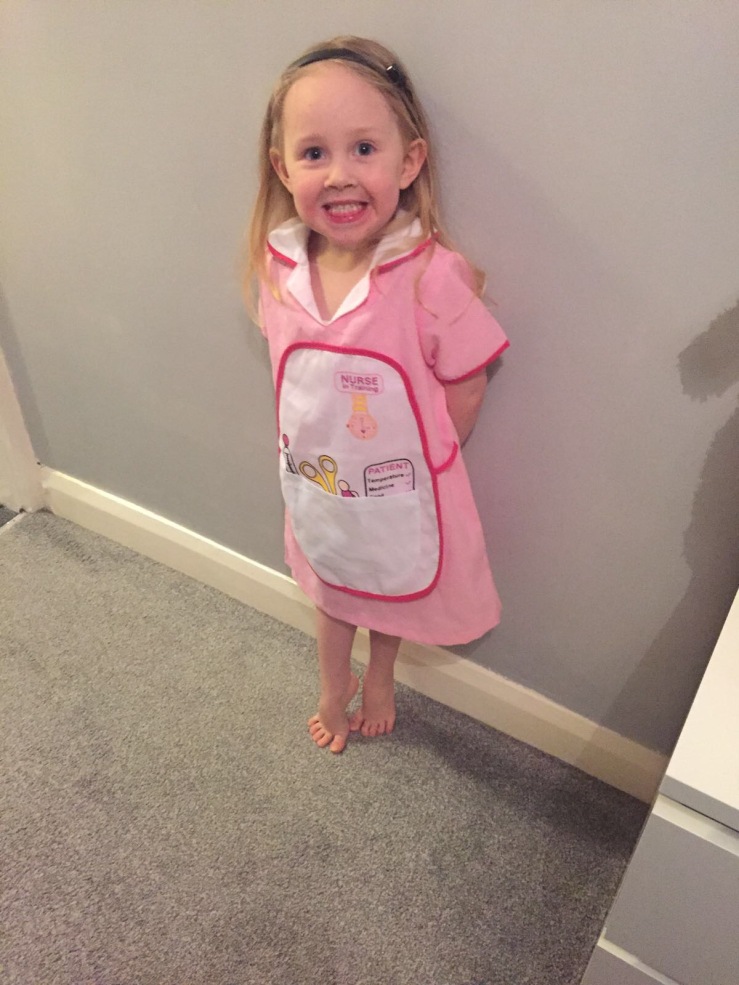 I hope with the amount of time that has passed since and the fact she turns four in May, she won’t have to endure another episode.

I’m also thankful that it is only me and my wife that have to live with the mental scars.

View all posts by garyporter84